A mountain full of enjoyment on your MTB near from the Hotel Spol!

Those of you who are downhill mountain bike enthusiasts will find a true playground at the Mottolino Bike Park – that can be easily reached on foot from our bike hotel in Livigno – because, inside you will find many trails and useful services.

11 trails that will get your heart racing

First of all, in order to find your way around the Mottolino Bike Park, you need to identify trails and activities that you will enjoy, depending on your level of technical and physical preparation. For everyone, also for those who choose to dedicate themselves to pure relaxation and going for walks, the Mottolino cable car reaches a height of up to 2,400 metres and that’s where the adventure starts! 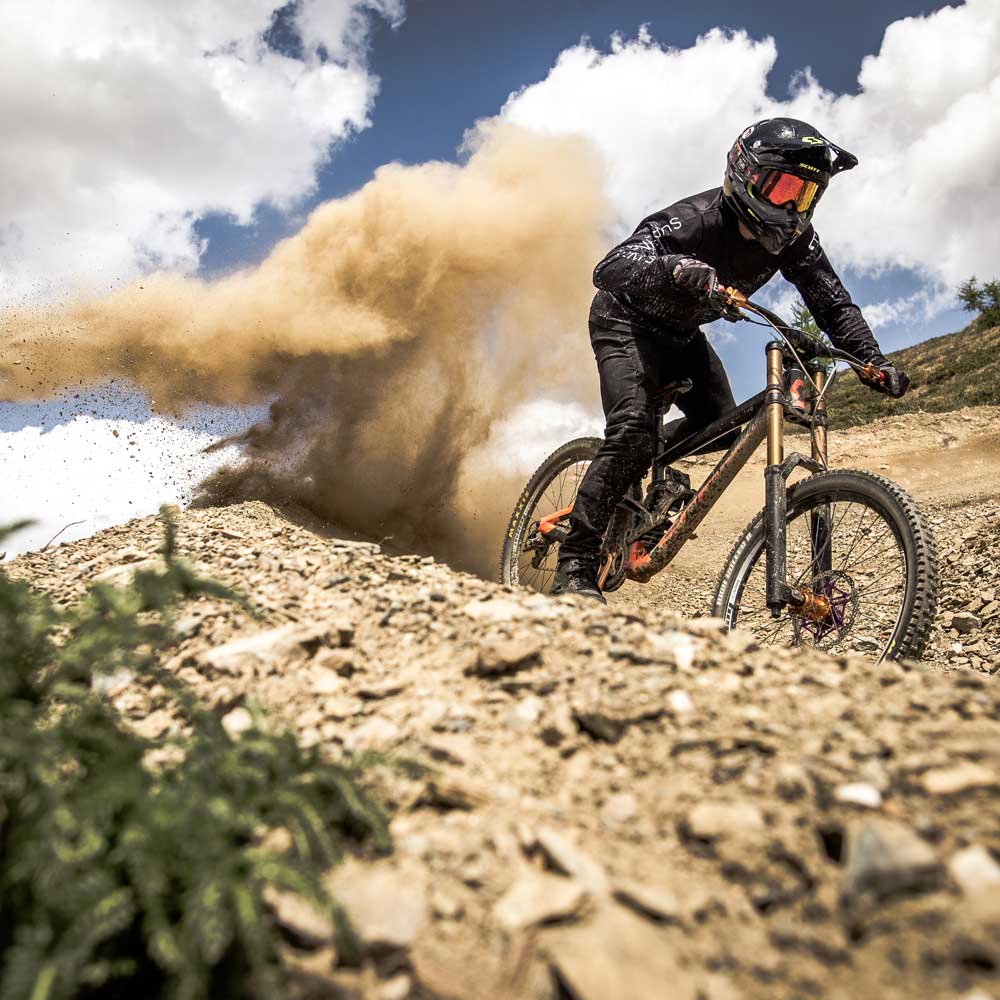 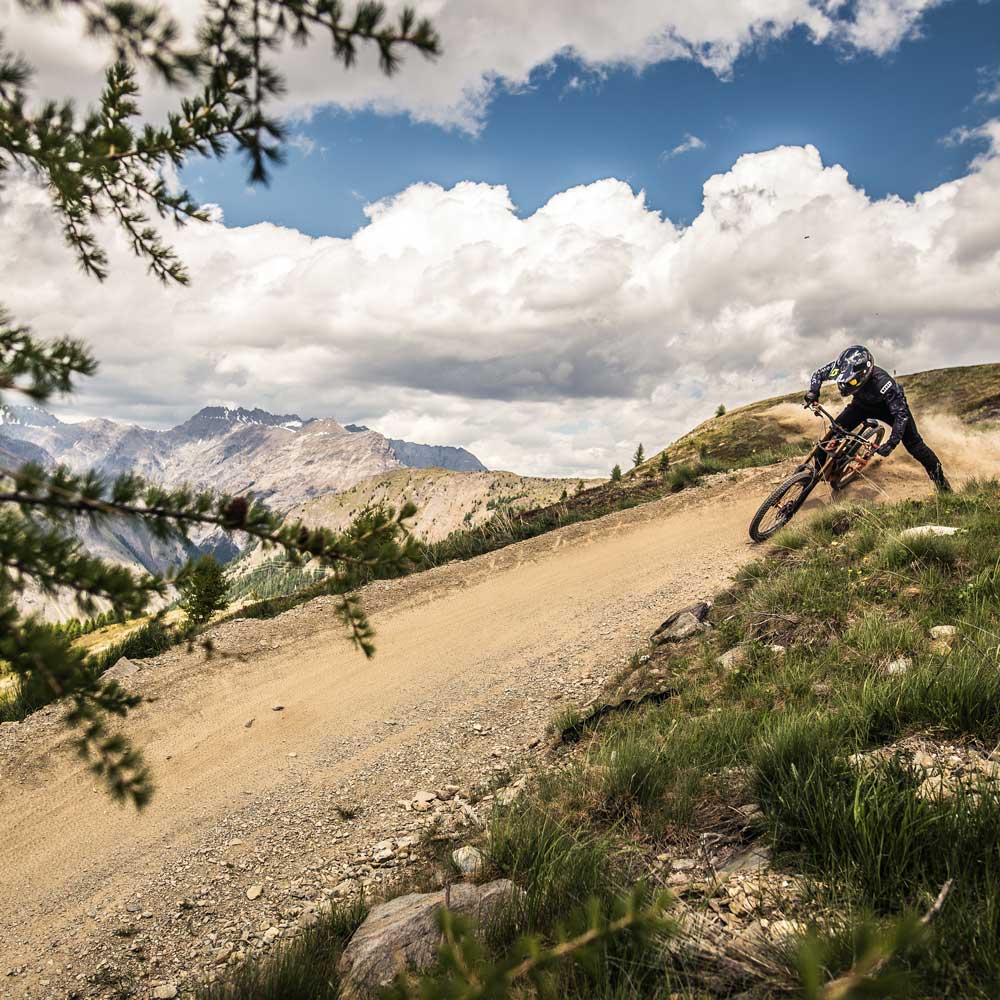 Take it easy: this is the best trail to take in order to get used to riding the MTB in the mountains and to warm up before facing the more challenging routes. › Watch the trail video

On the several red trails in the Mottolino Bike Park, you will be able to experience the thrilling characteristics of each trail by whizzing down the mountain riding your MTB: fast downhill slopes in the woods, tree roots, paths that become narrower and jumps make these trails exciting, without them being too demanding.

The black trails in the Mottolino Bike Park – are recommended only for those who have consolidated experience as a biker and in downhill mountain bike racing – these overwhelm athletes with a torrent of emotions including moments where technique and physical preparation are essential requirements in order to face extremely steep upward slopes, passages over stones, with narrow slippery downward paths and dangerous downhill slopes through the woods.

Inside the Mottolino Bike Park you will also find a dedicated refreshment area, a true high-altitude shelter, the name of which already makes your mouth water. Moreover, among the recommended activities there is also an area used for jumps that is fully equipped with beaten earth trampolines as well as a trail consisting of suspension bridges and wooden runways under the first stretch of the Mottolino cable car line. Naturally, there are also specific courses for those who are still not used to practicing this adventurous sport.

Check how is made the Mottolino Park!

Come and discover what the mottolino bike park is like

The thrills of the most demanding trails can also be experienced during the most spectacular MTB events in the Valtellina area: in particular, there are two legendary summer events where the manoeuvres and the mastery of the best riders in the world can be seen.

The Red Bull Wide Open in Livigno is one of the few MTB events that succeeds in combining techniques such as downhill, freeride and 4x racing in a rush of pure adrenalin for both sportspeople and spectators.

The Nine Knight MTB in Livigno is an eagerly-awaited event both by sportspeople as well as by video-makers, considering that the ability to capture the jumps and the stunts performed by the Nine knights of the Mountain Bike world is part of the competition.

Discover our services especially designed for biking enthusiasts
Stop in Valtellina: discover the 3 legendary clibes of the Giro d'Italia 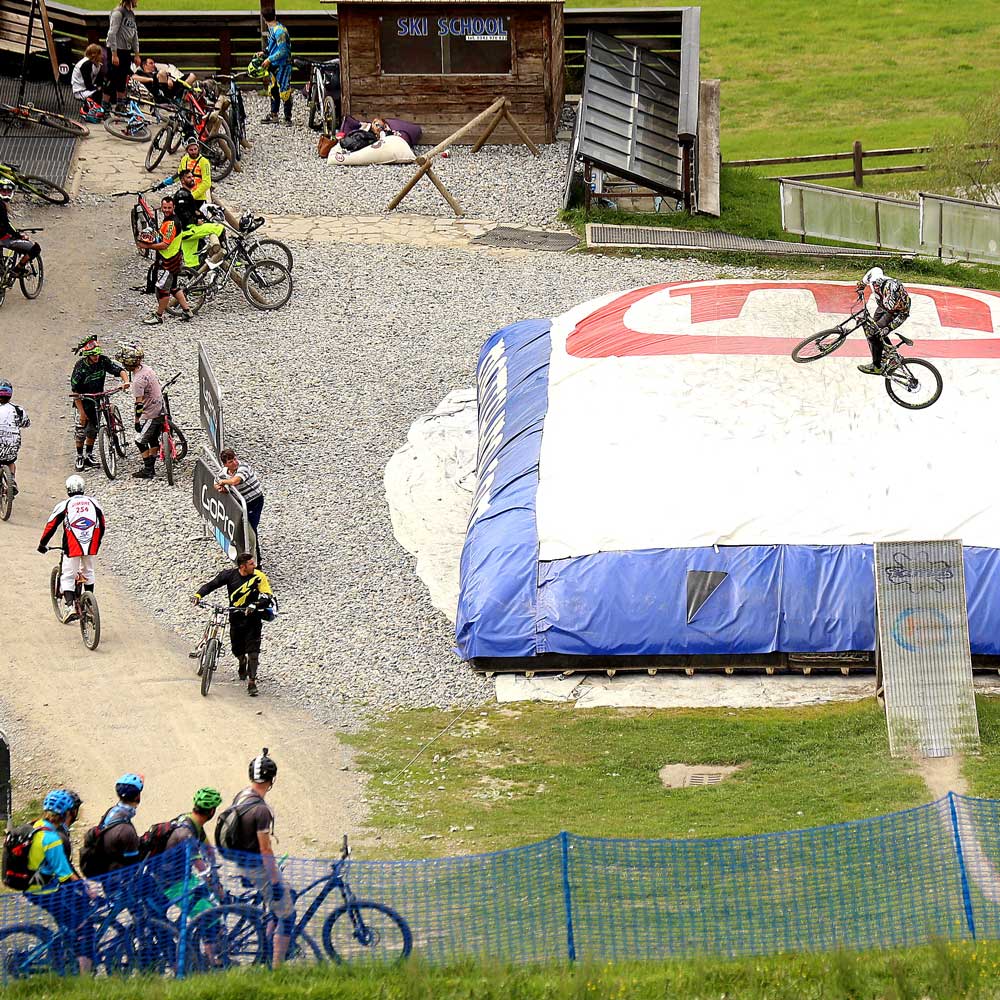 Create custom vacation of your dreams with our special offers

ENJOY OUR GUIDED HIKES IN THE UPPER VALTELLINA

SPEND JULY 2022 IN THE MOUNTAINS

OFFERS FOR YOUR SEPTEMBER IN LIVIGNO

IN SEPTEMBER, WE ARE GIFTING YOU A DAY IN THE VALTELLINA VALLEY!

YOUR EASTER SURPRISE IS THIS PACKET ON THE SNOW

YOUR MOST AMAZING HOLIDAY IN THE VALTELLINA VALLEY

EARLY BOOKING OFFERS FOR THOSE WHO BOOK BEFORE WINTER 2023

HOTEL PACKAGE FOR SKIING IN VALTELLINA

Offers for the husky village near Livigno

Dog sledding in Arnoga, in close proximity to here!

OFFERS IN JANUARY IN THE MOUNTAINS

WHERE TO GO IN JANUARY IN THE MOUNTAINS? THAT'S THE RIGHT CHOICE!

If you have any questions, please do not hesitate to contact the Hotel Spöl team

A great experience! Congrats to the hotel staff!

"The hotel service at Albergo Spol is nothing but amazing. Very professional, super friendly staff. Amazing breakfast and especially dinner (just wow - they can they cook!). Always a surprise (and sort of artwork) on a plate. Ideally located close to centre and ski area. Cosy wellness which is not too crowded (even in high season) and would recommend a relaxing massage (reasonable price). We are definitely coming back next year. Tip for travellers: ask for a renovated room - looks like a dream! Thank you Hotel Spol for making our vacation so enjoyable"

" wonderful view of the mountains! the staff was extremely friendly & competent! They were so friendly to my 8 year son , I was really impressed! The restaurant was also excellent & offered a super breakfast! wellness area was also very nice & relaxing! highly recommendable location & I’ve been to Livigno 20 times! This was my 1st opportunity to stay at the Hotel Spol, but we will be back!!!"

Have you been here and would like to receive so you can visit us again soon?